The guidance for the Coronavirus Job Retention Scheme (‘the Scheme’) provides that in order to be a qualifying employee within the Scheme, “Furloughed employees must have been on [the employer’s] PAYE payroll on 28 February 2020…”.  If a transfer takes effect after that date, for example on 1 March 2020, are the employees qualifying employees for the purposes of the Scheme, after all they were not on the transferee’s payroll on 28 February 2020?

Under TUPE employment does not cease on transfer (see for example Mears Homecare Limited v Bradburn in the context of National Minimum Wage production obligations). In the context of PAYE this is reflected in regulation 102 of the Income Tax (Pay As You Earn) Regulations 2003 which provides that if the employee remains in the same business but the employer changes then the change will not be treated as a cessation of employment so that no P45 is issued. However, this does not mean that the employee is on the transferee’s payroll at a date earlier than the transfer.

Every employer has a HMRC Employer Reference number which is used for administering income tax and national insurance contributions on the payroll.  This is referred to in the Guidance as the ‘ePAYE’ reference. The ePAYE reference is required to make a claim under the Scheme.

On a business transfer there are two possibilities with regard to the payroll. Either there is a ’merger’ or there is a ’succession’. A merger is where two or more PAYE schemes are brought together for the same legal entity. However, just because a business merges does not mean that the payroll merges. A succession  is when the ownership of the business changes from one legal entity to another and the new owner takes responsibility for the pay records. In both cases there will be a new Employer Reference (ePAYE) number allocated by HMRC.  In any case, just as if a new employee is recruited, the transferred employees will not be on the transferee’s payroll before the date they are employed.

Finally, it is important to note that the issue of whether an employee is or is not covered by the Scheme is primarily an issue between the employer and HMRC and will, ultimately, in cases of dispute, be a matter that is resolved in a tax tribunal and not an employment tribunal. As matters stand, an employer would have good grounds for not offering those employees who transfer after 28 February 2020 an opportunity to be furloughed but it would be sensible for the employer to seek guidance from the HMRC prior to doing so.

It is likely that the position in relation to transferred employees under Coronavirus Job Retention Scheme is simply an oversight by the Government and if there is revised guidance this may well change.

If you made employees redundant, or they stopped working for you on or after 28 February 2020, you can re-employ them, put them on furlough and claim for their wages through the scheme.

What transferred employees can therefore do is ask the old employer (the transferor) to take them back and immediately furlough them.  It is of note that the Guidance does not refer to employment having ceased (which of course it does not under TUPE) it only refers to the employee having been made redundant by or ‘stopped working’ for the employer (eg. transferor) after 28 February 2020.

Following exchanges between employment lawyers on social media, it became apparent that HM Treasury have confirmed to a conservative member of parliament, David Johnston MP, by email of 6 April 2020 that the the Scheme will apply to those transferred after 28 February 2020. The email exchange is set out below. 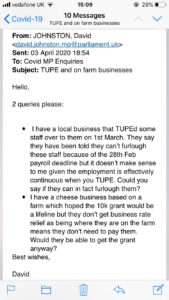 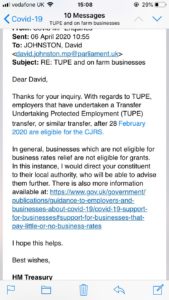 The Scheme Guidance for Employers

The Scheme Guidance for Employees

This site uses Akismet to reduce spam. Learn how your comment data is processed.

Nothing in this website should be regarded as legal advice. No liability is accepted for any loss or damage incurred by actions taken as a result of anything written or posted on this site.